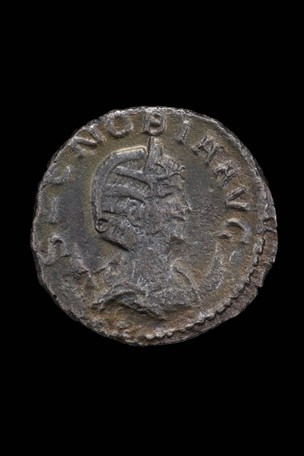 Intro: Brandi Mauldin at the University of North Carolina at Greensboro, supervised by Dr. Robyn Le Blanc. Brandi's research was an extension of the themes embedded in Dr. Le Blanc's Fall 2017 senior capstone seminar, "The Empire Strikes Back: Revolt and Resistance in the Ancient World." A project focused on Zenobia, the Palmyrene queen who led a breakaway state in Roman Syria in the 3rd century CE, was a natural bridge between the topics of the course, and the goals of WIRE. Brandi collected material evidence for Zenobia from Palmyra, entered that evidence into the WIRE database, and then wrote and designed this featured student exhibit.

Zenobia is known as the Queen of Palmyra who led her kingdom against the Roman Empire, but that is only a small part of her great history.  Zenobia was multilingual, accustomed to many cultures, and was known to have had private tutors.  She also encouraged restoration projects and also welcomed people of different religions to practice their faiths within the kingdom. (Southern pg 86, 2008)  During her reign, Palmyra also became a paideia, that is a Greek center of learning and thought where scholars and philosophers would gather to exchange ideas. (Andrade pg 335, 2013) According to the Historia Augusta, Aurelian said that Zenobia rode horseback like a man, spoke like a man, and hunted and drank with her generals.   While accounts of Zenobia’s life differ in details, the one account upon which they all agree is that Zenobia was highly intelligent and held a great amount of power which she was  comfortable in using, a stark contrast to the ideal Roman women, who were expected to be behind the scenes in political situations. (Bauman pg 60, 1994)